Comments to the Council on Environmental Quality

The Municipal Art Society of New York (MAS) has been advocating for sound planning and historic preservation for over 125 years. Improving environmental quality review is one of our primary advocacy objectives. As the National Environmental Policy Act (NEPA) turns 50, MAS finds the regulatory and procedural changes proposed by the Council on Environmental Quality (CEQ) under the January 10 Notice of Proposed Rule Making (NPRM) starkly ironic and deeply concerning. At a time when the federal government should be strengthening NEPA, the CEQ proposal would dismantle key pillars of the Nation’s cornerstone environmental legislation.

New York City is one of the few municipalities to take a cue from NEPA and adopt its own environmental quality review regulations called City Environmental Quality Review (CEQR). Since its introduction in 1977, CEQR has played a vital role in New York City’s environmental planning process, including its application to wide-scale neighborhood rezonings, the implementation of the City’s mandatory affordable housing policy, and various transit infrastructure projects. New Yorkers have come to depend on CEQR as a public disclosure process in which the environmental impacts of discretionary city actions are evaluated. Over the years, CEQR has been revised, adapting to a growing city and contemporary environmental issues such as greenhouse gas emissions (GHG), climate change, and resiliency. We expect the same forward-thinking to be undertaken at the federal level.

MAS has been a stalwart advocate for improving and enhancing CEQR regulations. Our recent report A Tale of Two Rezonings; Taking a Harder Look at CEQR, explored ways to strengthen the process by better forecasting potential future development and accurately evaluating a wide-array of its effects. Our recommendations include the evaluation of a range of alternatives, improving criteria to evaluate cumulative and indirect effects, increasing transparency regarding mitigation, and ways to garner more effective public input.

We have reason to be optimistic about CEQR reform in New York City. However, we are dismayed by the changes proposed by CEQ at the federal level. If allowed to move forward, NEPA will become a patently less rigorous, less reliable, and less public process—contrary to its intent and purpose. 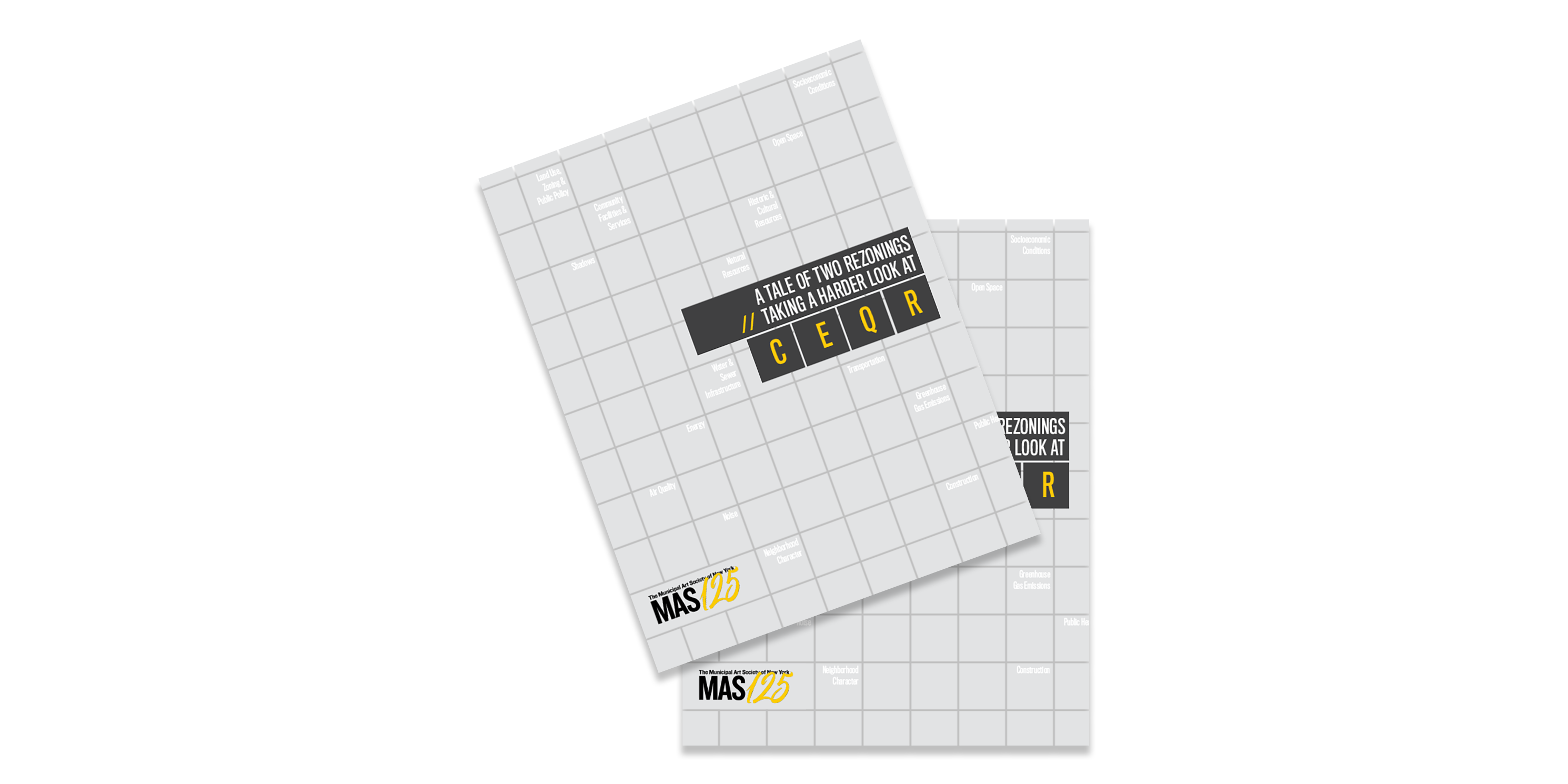 MAS's 2018 report, A Tale of Two Rezonings: Taking a Harder Look at CEQR.

MAS Comments on the Notice of Proposed Rule Making

In the name of reducing ambiguity, the NPRM proposes significant revisions to Part 1508 that would alter and add definitions to a number of key NEPA terms. One of the more significant revisions would change the meaning of major federal actions to exclude the consideration of non-Federal projects that have “minimal Federal funding or minimal Federal involvement” and where the agency “cannot control the outcome of the project.” The NPRM states that in these circumstances there is no practical reason that an agency should be required to conduct a NEPA review if that agency “could not influence the outcome of its action to address the effects of the project.”

MAS opposes this change on the grounds that the definition of major federal action should remain broad, as originally intended, to fulfill NEPA’s mandate: to ensure federal agencies consider the significant environmental consequences of their actions and inform the public about their decision-making process. NEPA gives lead agencies the latitude to tailor the level of environmental review commensurate with the project and level of agency involvement. Under the proposed rule changes, projects with the potential for substantial environmental impacts could be precluded from NEPA review if the lead agency determines the project involves a “minimal” amount of federal funding or requires a federal permit for a small portion of the overall project site. For example, a large pipeline infrastructure project that may damage natural habitat areas, wetlands, or culturally significant areas could be precluded from NEPA review if a “small portion” requires a federal permit. Furthermore, the NPRM provides no criteria by which to define “minimal” in the context of funding and involvement. Instead of reducing costs and delays by redefining the types of actions that fall within the scope of NEPA, we find this change would result in drastically reduced environmental protections.

MAS strongly objects to CEQ’s proposal to revise the meaning of “effects” or “impacts” (used synonymously) and eliminate cumulative and indirect impacts analyses from NEPA regulations. CEQ’s changes would limit the scope of NEPA reviews and the responsibility of lead agencies by redefining effects as outcomes that are “reasonably” foreseeable and have a “reasonably close causal relationship” to a proposed action. In addition, effects would not be considered significant if they are determined to be “remote in time, geographically remote, or the product of a length causal chain.” These changes leave far too much up to the discretion and interpretation of a lead agency to determine what is a reasonably foreseeable impact. Existing NEPA regulations also mandate that lead agencies evaluate actions and all “reasonable” alternatives not within its jurisdiction. As such, we find this rule change would result in significantly compromised NEPA evaluations.

MAS also unequivocally opposes eliminating the evaluation of indirect impacts. We understand through our CEQR advocacy that indirect impacts such as residential and business displacement from large-scale developments and rezonings in New York City are critical to environmental review. Although indirect impacts occur later in time and are often far removed in distance, they are no less important than direct impacts. As evidence, the Supreme Court of the State of New York recently annulled the City’s rezoning of Manhattan’s Inwood neighborhood on the grounds that the City failed to take a hard look at indirect impacts as they relate to socioeconomic conditions (i.e., residential displacement).

Under the proposed rule changes, CEQ would redefine reasonable alternatives to be those that are determined by the lead agency as “technically and economically feasible and meet the purpose and need of the proposed action.” The rule changes also assert that a reasonable alternative must consider the goals of the applicant when the agency’s action involves a non-Federal entity. MAS finds these changes, when coupled with the proposed rule change that would allow non-Federal agencies (i.e. applicants and contractors) to conduct their own NEPA reviews, particularly concerning (see Agency Responsible for Environmental Documents). In our advocacy for CEQR reform in New York City, MAS recommends that any comprehensive and reliable environmental review must explore a diverse range of alternatives to allow the public and decision-makers the opportunity to evaluate different scenarios and weight the merits and drawbacks of each. Limiting the evaluation of alternatives analysis to only those that meet the economic goals of the lead agency, especially when it is the applicant or contractor, is inconsistent with the protections under NEPA regulations.

The proposed exhaustion requirements in §1500.3 would make it more difficult to legally challenge deficient NEPA evaluations. MAS objects to the proposed requirement that “any objections to the submitted alternatives, information, and analyses” be submitted within 30 days of the notice of availability of the Final Environmental Impact Statement (FEIS). Thirty days is not nearly enough time for a respondent to comprehensively review and effectively comment on most FEISs. Furthermore, whether or not a particular issue was raised by a commenter during the 30-day comment period, the courts should decide what is permissible in the event of a legal challenge to a NEPA review.

MAS opposes the new remedies clause added to the NEPA Mandate section (§1500.3(d)). The remedies clause holds that as long as a lead agency follows the procedural requirements of NEPA, it cannot be subject to a court-ordered injunction or held legally accountable in the event that it fails to comply with NEPA (i.e., incomplete or deficient review) and environmental harm occurs as a result of an action. MAS opposes this new rule on the grounds that it would weaken the ability for the public or other entities to hold lead agencies legally responsible for not carrying out NEPA’s mandate. At all levels of the federal government, lead agencies must be responsible for disclosing the environmental effects of an action to the public. In all circumstances, if a NEPA review is deficient, lead agencies must be held accountable and be subject to legal challenges.

MAS supports the tiering of environmental review documents if it improves efficiency and eliminates repetitive discussion of the same issues. We also support tiering if it helps focus on issues ripe for decision at each level of environmental review.2 While we have no objection to the provisions of the NPRM tiering clause (§1501.11), we do object to the statement, relative to the revisions to tiering and programmatic reviews (§1502.4(d)), that “site-specific analyses need not be conducted prior to an irretrievable commitment of resources.” We maintain that the NEPA process must be complete and a Record of Decision (ROD) must be issued before any resources (e.g., the acquisition of land) are committed for an applicable project.

MAS supports NEPA revisions that would result in more concise and readable environmental review documents. We also support any changes that help ensure that agencies conduct reviews efficiently and expeditiously. However, we find the changes proposed under §1502.7 that would set time limits on the preparation of Environmental Assessments (one year) and EISs (two years), and limits to page length (not including appendices) of EAs to 75 pages and EISs to 300 pages, to be arbitrary. Although the clause allows documents to exceed the proposed page limits if an extension is requested and approved in writing by a senior agency official, we anticipate that there would be frequent requests for extensions, which would ultimately defeat the purpose of page limitations.

MAS finds the update to §1506.5 one of the more potentially damaging changes proposed by CEQ. In the name of giving lead agencies more flexibility in preparing environmental review documents and requiring agencies to “independently evaluate” and “take responsibility for those documents,” the rule change would allow applicants and contractors to conduct their own independent NEPA evaluations. The proposed rule change is simply shocking. One NPRM commenter compared this to having the fox guard the hen house.3 If allowed to proceed, the change would categorically undermine existing NEPA conflict-of-interest requirements and remove protections against biased environmental reviews. In addition, there is nothing in the NPRM that ensures that independent environmental reviews completed by applicants and contractors would meet NEPA requirements. MAS sees this rule change as a recipe for disaster.

MAS asserts that CEQ must reestablish the methodologies, guidelines, and thresholds for assessing GHG emissions and climate change impacts outlined in the August 2016 guidance document. NEPA review documents must disclose the GHG emissions for every applicable project. The GHG impacts of site-specific projects, not only large-scale projects, contribute to the cumulative impacts of the overall effects of GHG emissions. Furthermore, NEPA regulations should be revised to require projects that would result in significant GHG emissions (i.e., fossil fuel-burning energy plants, fossil fuel pipeline construction and operation, mining and extraction activities) to disclose the GHG emissions during construction and operation, mitigation measures, and an evaluation of alternatives that reduce GHG emissions.

CEQ is mandated to ensure that Federal agencies meet their obligations under NEPA. In this capacity, CEQ oversees all NEPA implementation through guidance documents and interpreting NEPA’s procedural requirements. For a government entity that plays such an important role in protecting our environment, CEQ’s proposed rule changes show a reckless disregard for the protections accorded under NEPA and are grossly inconsistent with the its intent and purpose. MAS supports new rules and regulations that would strengthen, modernize, and clarify NEPA regulations in the name of more efficient, effective, and timely reviews. However, we are adamantly opposed to the proposed rule changes that would weaken the foundations of NEPA and imperil the human and natural environment.