Testimony to Board of Standards and Appeals

The Municipal Art Society of New York (MAS) has actively followed the proposed development at 200 Amsterdam Avenue from the building permit application process through the current appeal before the Board. The development proposal was also featured in the 2017 update of our Accidental Skyline initiative in which we identified several loopholes in the City’s regulations that have been exploited by developers to create larger buildings than intended by zoning (Figure 1). The gerrymandering of zoning lots was one them.

As we mentioned at the March 27 hearing, there are significant inconsistencies with the 200 Amsterdam Avenue zoning application submitted to the Department of Buildings (DOB) by SJP Properties Mitsui Fudosan America (“the Applicant”). On two primary levels we found the application did not comply with the New York City Zoning Resolution (ZR): the manner in which the gerrymandered zoning lot was created and how open space was defined and used to increase the height of the proposed building.

On the first point, MAS maintains that the gerrymandered zoning lot does not comply with the requirements of a zoning lot as defined in Section 12-10 of the ZR because it does not consist of complete “lots of record” as shown on the official tax map of the City of New York, but rather parts of tax lots.

As for open space, we remain steadfast in our assertion that a significant portion of the lot area that is classified as open space—largely vegetated areas inside interior parking spaces and driveways— would in fact not be accessible to the future residents of 200 Amsterdam Avenue.

In weighing its decision regarding 200 Amsterdam Avenue, we also urge the Board to consider the potential citywide consequences of allowing the development to proceed as proposed.

In doing so, we believe the door would be open for other developers to exploit gerrymandering as a mechanism to build taller, denser buildings on similar sites throughout the city and subject other neighborhoods to grossly out-of-scale development.

To explore this notion, MAS conducted a preliminary analysis of sites vulnerable to zoning lot gerrymandering based on several criteria, including, but not limited to, zoning designation, unused development rights, and availability of unbuilt land. As shown in Figure 2, our evaluation identified 1,400 potential sites across the five boroughs.

The most likely development sites are blocks that contain tower-in-the-park style buildings and have excess available development rights. Many of these sites are clustered in East Harlem, the south Bronx, and the Brooklyn neighborhoods of Bedford-Stuyvesant, Crown Heights, and Prospect Lefferts Gardens.

Two sites in particular, Bedford Gardens in Brooklyn (Block 2186 Lot 1) and NYCHA Parkside Senior Center in the Bronx (Block 4542 Lot 100) show a high potential for zoning lot gerrymandering and illustrate the ramifications of allowing the proposed development at 200 Amsterdam Avenue to proceed. In both instances, much like 200 Amsterdam Avenue, gerrymandering would dramatically change and increase the size of potential development.

For the Bedford Gardens site, zoning lot gerrymandering could double the size of the potential development from approximately 69,000 square feet (sf) to 137,000 sf. The potential nineteen-story building would be nearly triple the height of all surrounding buildings. Furthermore, without the development incentive offered through gerrymandering, the only configuration that would likely satisfy the sixty feet zoning requirement for distance between legal windows of adjacent buildings would be a significantly smaller, single loaded building, which may not be feasible from an economic standpoint. 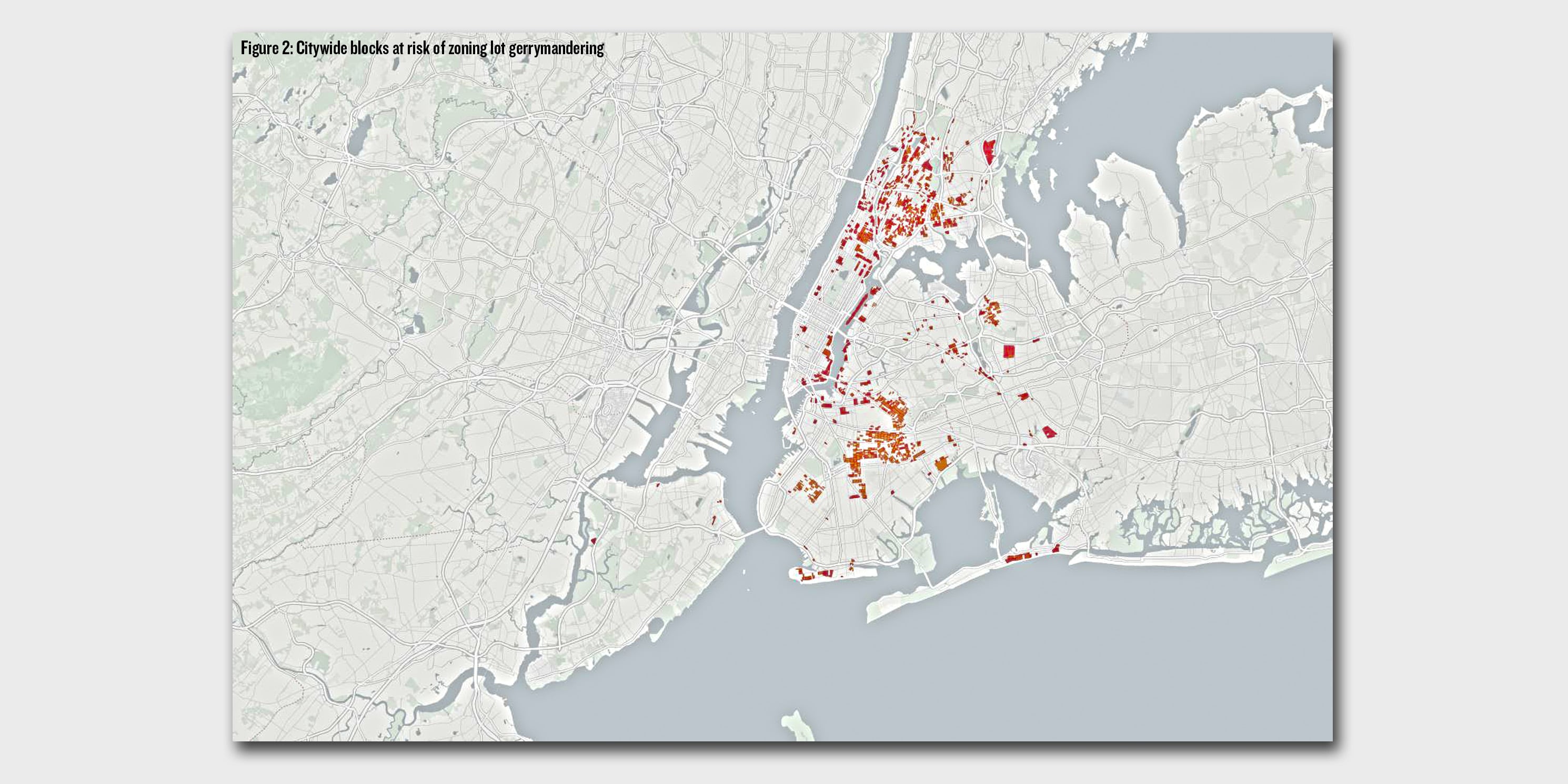 For the Parkside Senior Center site, it is doubtful any additional development could occur at all without the benefit of zoning lot gerrymandering. However, in making use of this illegal maneuver, the site could potentially be developed with an approximately 112,000 sf, twenty-five story building that would be double the height the tallest towers on the block and far taller than any building in the surrounding neighborhood.

The potential developments on these sites across the city would likely follow the general pattern of the development at 200 Amsterdam Avenue: infill sites taking advantage of height-factor districts resulting in additional tower-in-the-park buildings that are both unplanned and out-of-scale.

Gerrymandering of zoning lots is inconsistent with the intent of zoning in New York City, which is designed to foster reasonable as-of-right development pursuant to the provisions of the underlying zoning district. By upholding the existing building permit at 200 Amsterdam Avenue and in essence sanctioning zoning lot gerrymandering, the Board’s decision would create uncertainty in the built environment and potentially affect dozens of neighborhoods across the city.

MAS urges the Board to support the appeal and revoke the building permit for 200 Amsterdam Avenue. Allowing this building to move forward in light of our concerns would set an extremely harmful precedent in allowing developers to skirt the provisions of the ZR.