Award presented by The Municipal Art Society at Annual Gala

On Wednesday evening, William J. vanden Heuvel received The Municipal Art Society’s 2016 Jacqueline Kennedy Onassis Medal in recognition of his role in building Four Freedoms Park, as well as his six decades of distinguished public service. The medal was presented by journalist Bill Moyers in a ceremony that included speeches by MAS President Gina Pollara and Chairman Frederick Iseman, as well as a video greeting from United States Ambassador to Japan Caroline Kennedy. Peter Duchin and His Orchestra provided live music for the evening. 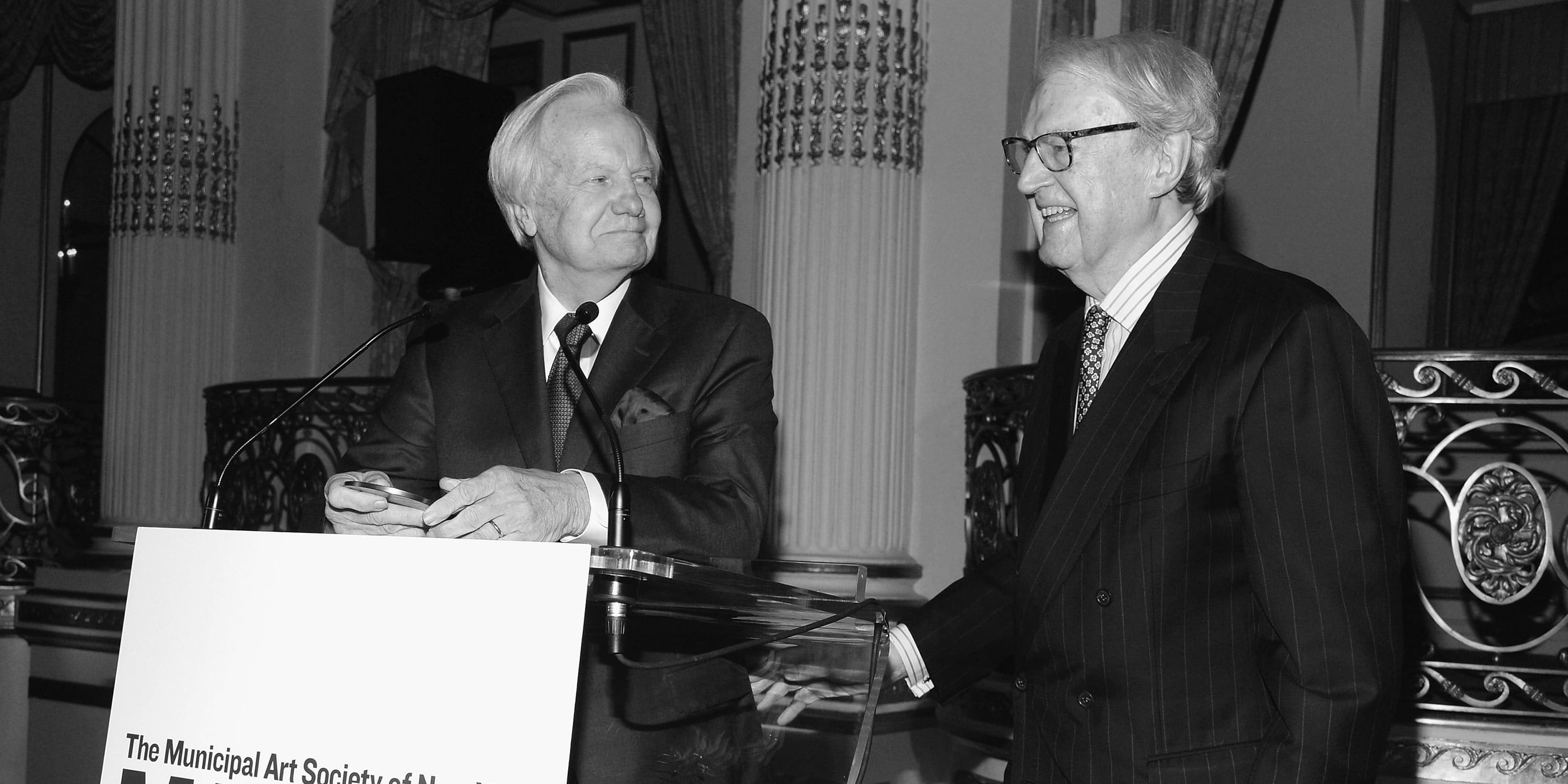 William vanden Heuvel and Bill Moyers at the Gala

“It is an honor to celebrate Ambassador vanden Heuvel with the Onassis Medal. His life work has made this city and the world a far better place,” said Pollara. “Bill is a man of great intellect and unparalleled integrity, which he has focused on promoting civic values on many fronts, here in New York and beyond. From his work with the Department of Justice and the New York City Board of Corrections, to his diplomatic career, humanitarian leadership, and the unwavering passion that built the Four Freedoms Park, he has been an exemplar of the great legacy of Franklin and Eleanor Roosevelt.”

“We honor Ambassador vanden Heuvel,” said MAS Chairman Frederick Iseman, “for the creation of Four Freedoms Park and for countless other contributions to our City and country which sustain and define the mission of MAS. Combining private sector achievements in the law and investment banking, Ambassador vanden Heuvel at the same time has created a career in public service that has won him national recognition and appreciation.”

The Onassis Medal was presented at MAS’s annual charity gala on June 8, 2016, at The Plaza Hotel. All proceeds from the event will support MAS in its advocacy for excellence in urban planning, preservation, and community engagement. Founded in 1893, MAS is one of the oldest membership organizations in New York City, and was instrumental in key battles that have shaped the future of New York, from establishing a national model for historic preservation law to saving Grand Central Station from demolition in the 1970s, in partnership with Mrs. Onassis herself.

Ambassador vanden Heuvel has had a long and deep personal relationship with the Kennedy family, including Jacqueline Kennedy Onassis. “Mrs. Onassis was a cherished friend which makes the award in her name personally meaningful to me. I have no doubt that Jackie would have loved Four Freedoms Park as the last grand masterpiece of its architect, Louis Kahn. I am honored to accept The Municipal Art Society’s 2016 Jacqueline Kennedy Onassis Medal. I believe very strongly in the work MAS does in its advocacy for growth and progress based on the civic values that make New York the greatest city in the world,” said Ambassador vanden Heuvel. “The work of MAS and its leadership and staff deserves our recognition and profound respect.”

Ambassador vanden Heuvel has served as Deputy U.S. Permanent Representative to the United Nations and as U.S. Ambassador to the European Office of the U.N. An international lawyer, he is also Senior Advisor to Allen and Company, a New York investment banking firm. Ambassador vanden Heuvel has served as President of the International Rescue Committee, as Chairman of the Board of Governors of the United Nations Association of the United States of America, and as Chairman of the New York City Board of Correction. He was Vice President of the 1967 Constitutional Convention. A graduate of the Cornell University Law School, he was Editor-in-Chief of the Cornell Law Review and later served as Executive Assistant to General William J. “Wild Bill” Donovan, Special Counsel to Governor Averell Harriman and Assistant to Attorney General Robert F. Kennedy. Ambassador vanden Heuvel is a member of the Council on Foreign Relations, Founder and Chair Emeritus of the Franklin and Eleanor Roosevelt Institute and the Four Freedoms Park Conservancy, Inc., Co-Chair of the Council of American Ambassadors, and Chair of the Open Medical Institute. He is a director of the American Committee for East-West Accord.

The Onassis Medal, MAS’s highest honor, is awarded annually to an individual or institution who, by their work and deeds, have made an outstanding contribution to New York City. Launched in 1950 as the President’s Medal, the award was renamed in 1994 in honor of Mrs. Onassis’ tireless efforts in partnership with MAS to preserve and protect New York’s great architecture. Previous honorees include Dr. Judith Rodin and David Rockefeller, Jr., of The Rockefeller Foundation, Diane von Furstenberg, Channel 13/PBS, Robert DeNiro, Elihu Rose and Wade Thompson, and I. M. Pei. 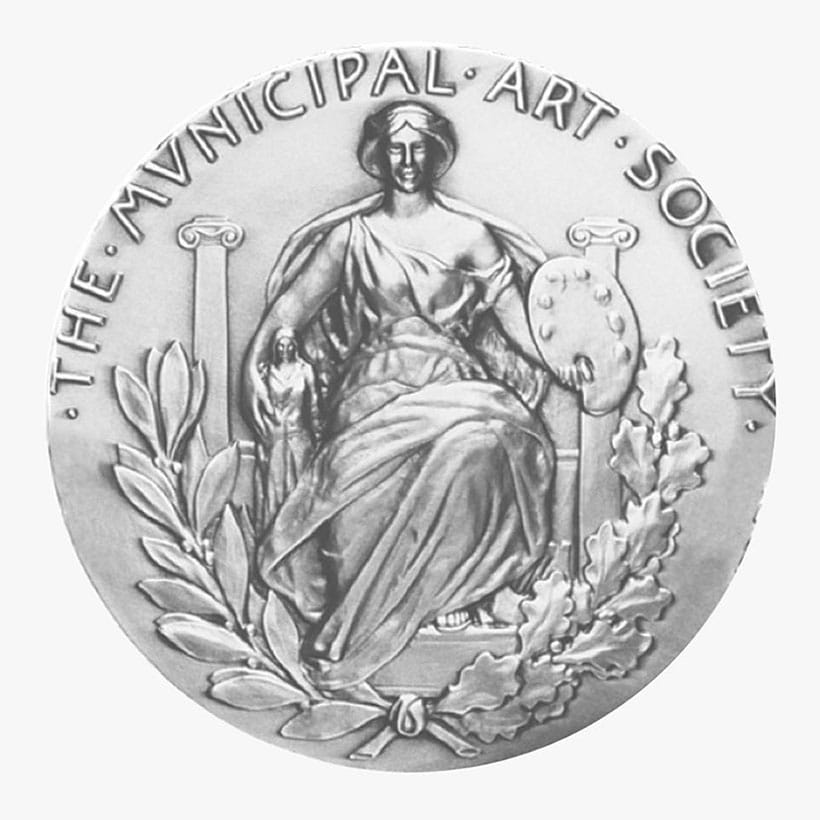 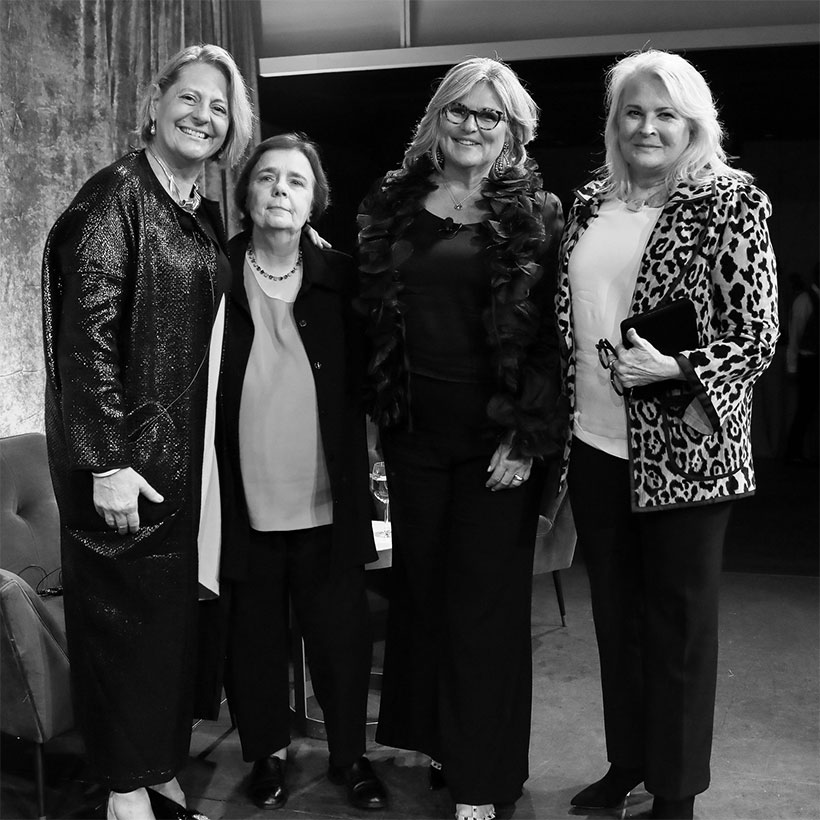