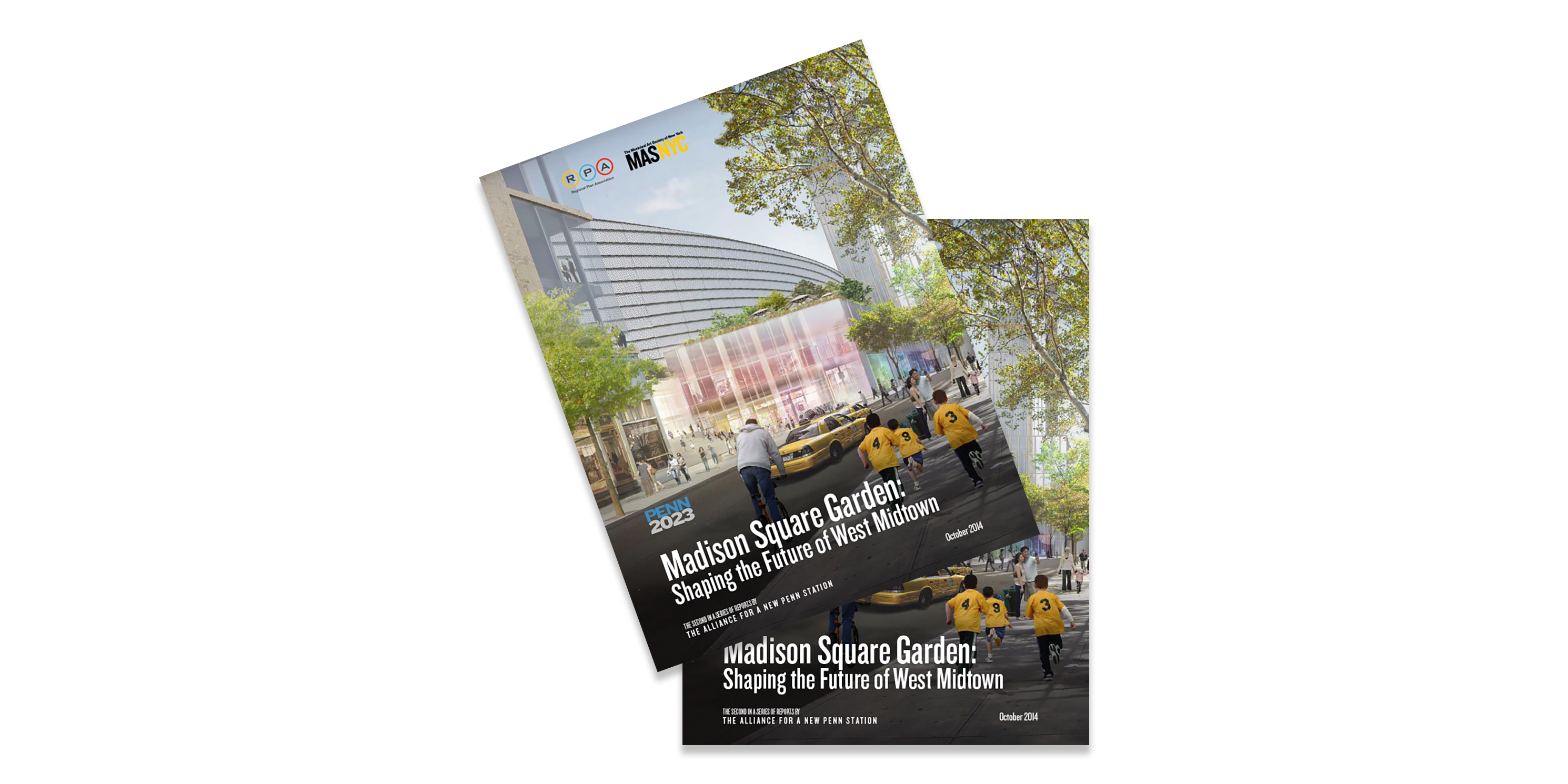 A new city within a city is emerging in West Midtown, and Penn Station is at the center of it. Yet the station is deﬁcient in many ways and critically unprepared to absorb future growth. Over the next few years, diﬃcult decisions about the futures of Penn Station, Madison Square Garden and West Midtown must be made to ensure the economic vitality of the New York region for years to come.

West Midtown is in the midst of tremendous change

Hudson Yards, the largest private real estate development in U.S. history with tens of millions of square feet of development, is under construction in West Midtown. This development will bring hundreds of thousands of new residents, workers and visitors to the area. The opening of the 7 train extension from Times Square to 34th Street and 11th Avenue, and the completion of the ﬁrst phase of Moynihan Station will help serve this growing district, but that alone is insuﬃcient to absorb the coming increases in travel demand to and from West Midtown.

Penn Station is the primary transit hub in West Midtown, yet it is critically unprepared to handle any new growth in travel demand. Built to accommodate 200,000 passengers per day; the station is now handling nearly 600,000, contributing to Penn Station’s overcrowded, oppressive and increasingly unsafe conditions. With New York City’s projected growth in both population and employment between now and 2030, now is the time to enact a plan to increase the capacity of Penn Station, the region’s most important transit hub.

Major expansion and reconstruction of Penn Station and its 100-year-old tunnels are required to support the expected population growth and catalyze economic activity in the New York-New Jersey-Connecticut metropolitan region for the next half century.

The Hudson River rail tunnels, which carry more than 160,000 passengers on more than 500 trains in and out of Penn Station every day, have long been in need of major repairs. The urgency about the tunnels’ condition increased substantially after Hurricane Sandy, which ﬂooded the tunnels for the ﬁrst time in their history, causing extensive damage. According to Amtrak, both of the Hudson River tunnels need to be shut down, one at a time for more than a year each, for major repairs. With no alternative route into Penn Station, closure of one of these two tunnels would slash rail service across the Hudson River by 75 percent during the busiest periods of the day, severely disrupting travel throughout the region as commuters shift to alternative ways of crossing the river, such as cars, buses, PATH and ferries. The region urgently needs a new pair of rail tunnels to keep traﬃc moving. Once built, new tunnel capacity along with the addition of new platforms at Penn Station will provide the “swing space” the railroads need to continue operating uninterrupted as major construction activity occurs at and around Penn Station.

With Madison Square Garden and Two Penn Plaza in their current conﬁguration, options for improving Penn Station are severely restricted. Bleak entrances could be upgraded; the maze of concourses could be uniﬁed, rationalized, and expanded; and retail space could be built to attract high-quality food and goods. However, the structural elements supporting the Garden complex limit potential improvements to tracks and platforms, opportunities to raise ceiling heights and bring in natural light, and more. Leaving the Garden and its structural elements in place would also increase the cost and complexity of many other potential station improvements. A fresh approach to the design of the arena and station would allow for a vastly superior station and more appealing urban conditions.

This is a unique, once-in-a-generation opportunity to reimagine the future of Penn Station, Madison Square Garden and West Midtown

Decisions about the Garden’s future will aﬀect the future of Penn Station. Madison Square Garden has moved three times in its history; it is reasonable to think it will move again. It is also important to understand what will happen if the Garden stays in place. This report examines three potential visions of the future for the Garden – one where the arena remains in its current location; a second where it moves to the Farley Post Oﬃce Annex site, the western half of the block across 8th Avenue from the current Garden; and a third where it moves to the Morgan Post Oﬃce and Annex site just a few blocks southwest of the where the Garden stands today.

Relocating the Garden would unlock enormous beneﬁts for Penn Station’s railroads and their riders, Madison Square Garden’s owners, teams and artists and their fans, as well as the public. Unearthing the Garden and all of its support columns and utilities would allow for a complete overhaul of Penn Station, providing an opportunity to build a new city landmark. Likewise, the new Garden could be designed as an ultra-modern entertainment complex that has lower production costs, attracts even more events and visitors, and supports and catalyzes the future development of West Midtown. The Alliance for a New Penn Station believes that relocating the Garden, and ultimately Two Penn Plaza as well, will be necessary to create a new, world-class Penn Station capable of handling the growth in rail ridership that is projected and anchoring the new city within a city rising in West Midtown.

From the extensive analysis presented in this report, the Alliance for a New Penn Station recommends the Morgan Post Oﬃce and Annex site as the most suitable place for Madison Square Garden to go

The site of the Morgan site, located between 9th and 10th avenues and 28th and 30th streets, is both large enough to accommodate a new state-of-the-art arena and a quick, three- to seven-minute walk from Penn Station. Relocating the Garden to this site will provide the city with a new arena and allow for the reconstruction and expansion of Penn Station, each of which can be designed to vastly improve the conditions of the district.

Addressing all of these challenges will require creative, new approaches

Other cities that have reconstructed old or built new major train stations in dense, complex urban environments, like San Francisco, London and Denver, have created a single entity and given it the authority to act as “master builder” for the station area. This method helps to address both infrastructure and land use challenges and raise the revenue necessary to plan for the future. Similar approaches could deliver the same results in New York.

The Alliance for a New Penn Station

In the summer of 2013, Regional Plan Association and the Municipal Art Society led a coalition that convinced the New York City Council to limit Madison Square Garden’s operating permit from a permit in perpetuity to one that expires in just 10 years. We now have eight and a half years to chart a new course for the Garden. This deadline is a unique opportunity to both rethink how this vital transportation hub can better fulﬁll its role as a civic anchor and create a new, 21st century entertainment and cultural center that could become a strong economic driver for the city. Now is the time to consider the future of Madison Square Garden so that we can plan for an improved Penn Station and West Midtown district.

This report, the second in a series by the Alliance for a New Penn Station, focuses on the future of Madison Square Garden, and more speciﬁcally on the question of whether it should remain in place or be built anew on another site. The ﬁrst report, Penn 2023, released in October 2013, summarized the vision of the campaign for a new Penn Station. In it, the Alliance identiﬁed the elements of a successful strategy for West Midtown, including a comprehensive plan for the district; a completed Moynihan Station; an expansion of transit capacity, achieved through the Gateway Program and an expansion of Penn Station to the south; and construction of a new Madison Square Garden on a new site. Future reports by the Alliance for a New Penn Station will focus on the numerous transportation and economic development issues in West Midtown.