“New York’s network of POPS offers more than 80 acres of outdoor and indoor space in some of the densest neighborhoods of the city,” said Elizabeth Goldstein, President of The Municipal Art Society. “We are eager to see talent and creativity channeled into a new logo that can serve as a beacon for New Yorkers in search of a place to gather, unwind, and interact with one another.” 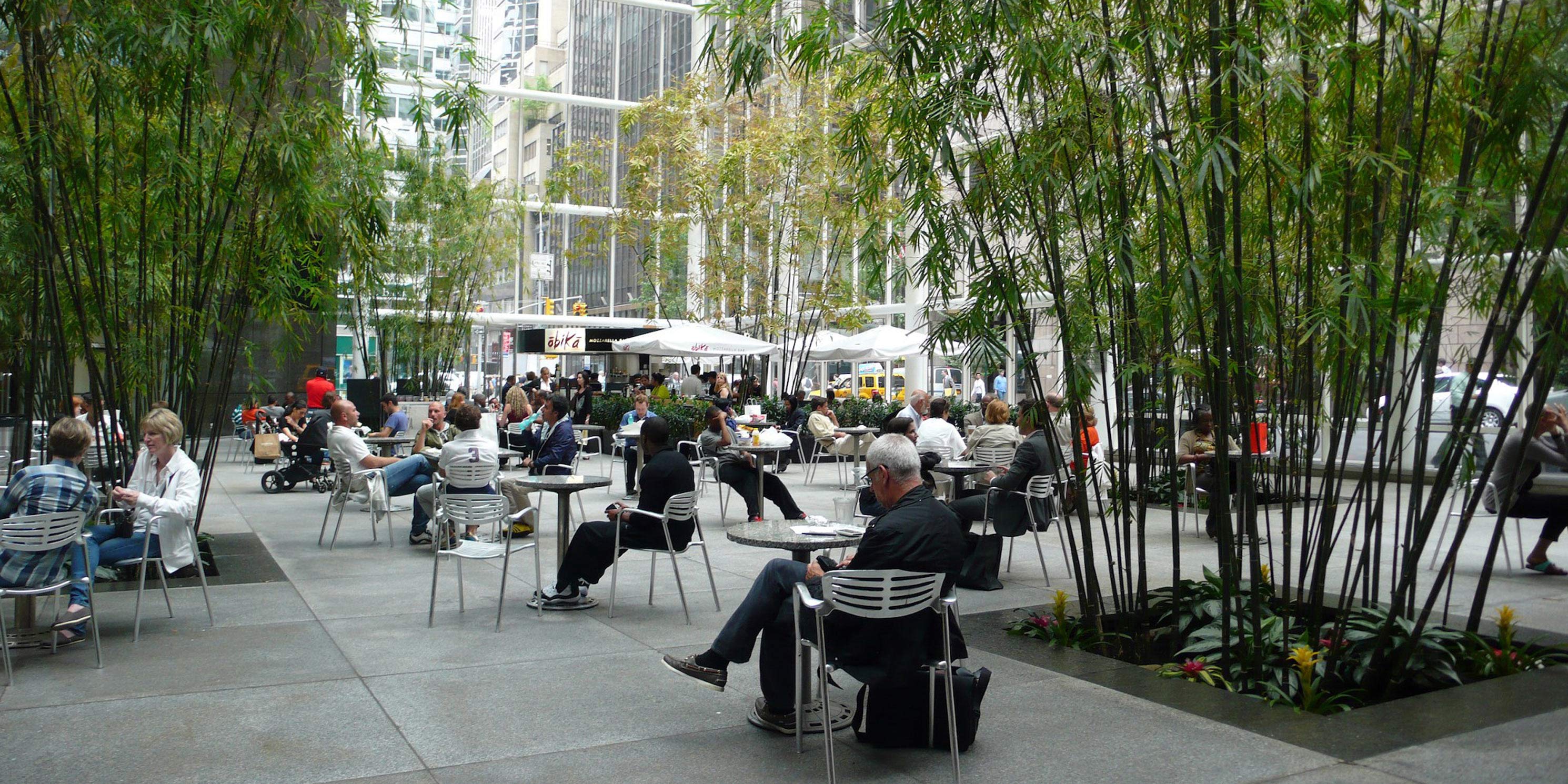 “POPS are open to the public just like any one of our amazing parks or plazas. This competition will give a fresh face to POPS across the city and encourage New Yorkers and visitors alike to enjoy these public spaces,” said Mayor Bill de Blasio.

“What’s your creative idea for an eye-catching, welcoming logo to grace the entrance of hundreds of POPS sprinkled throughout New York City’s bustling business districts? We’d love to see it! The chosen design will become instantly recognizable to millions, and act as a draw for New Yorkers and visitors seeking a quiet spot for lunch, to read or to meet a friend,” DCP Director Marisa Lago said.

“Communicating through a logo the full meaning of public space as welcoming and inclusive places for diverse public uses is no easy task. Using an open design competition inviting members of the public to invent a symbol of ‘publicness’ to be placed at hundreds of plazas, arcades, and other outdoor and indoor POPS makes poetically good sense,” said Jerold Kayden, Frank Backus Williams Professor of Urban Planning and Design, Harvard University and President, Advocates for Privately Owned Public Space.

“The POPS logo design Competition is a unique opportunity for one creative symbol to unify all POPS locations,” said Land Use Chair Council Member Rafael Salamanca. “My community cherishes our public spaces and I look forward to seeing the many innovative submissions to the Competition.”

The new logo will create a recognizable identity for the city’s wide variety of POPS, and by being included on POPS signage, will communicate that these spaces are open to the public.

Submissions will be posted online and displayed at a public exhibit in March 2019, inviting the public to view all submissions and vote for its favorite logos. A seven-person panel, along with the public vote, will select up to three awardees, each of whom will receive $2,000 and be honored at a public event. From these selected logos, DCP’s Director Lago may choose one to become the official New York City POPS logo, and that awardee will receive an additional $2,000. Awards are provided through a gift by Knoll. Awardees and the City’s choice for the official New York City POPS logo will be announced online on Monday, May 20, 2019.

POPS are the result of City zoning regulations aimed at ensuring that the densest areas of the city offer outdoor and indoor places that are usable by the public without charge. The POPS program has produced nearly 3.8 million square feet of additional public space in the City — equivalent to roughly nine Bryant Parks, 24 Union Squares, or roughly 10% of Central Park.

POPS are spaces dedicated to public use and enjoyment. They are owned and maintained by private property owners. POPS come in many shapes and sizes, located both outdoors and indoors. POPS are now required to include public space signage, informing New Yorkers and visitors about hours of access, required amenities such as seating, and to report any complaints to 311.

The seven members of the panel who, along with the public vote, will select Awardees are:

More information on POPS can be found at DCP’s recently updated web page, http://nyc.gov/pops and its newly unveiled interactive map at https://capitalplanning.nyc.gov/pops, and at the APOPS|MAS website at http://apops.mas.org. You can also follow the Competition on social media via #POPSLogoNYC.

About The New York City Department of City Planning
The Department of City Planning (DCP) plans for the strategic growth and development of the City through ground-up planning with communities, the development of land use policies and zoning regulations applicable citywide, and its contribution to the preparation of the City’s 10-year Capital Strategy. DCP promotes housing production and affordability, fosters economic development and coordinated investments in infrastructure and services, and supports resilient, sustainable communities across the five boroughs for a more equitable New York City.

In addition, DCP supports the City Planning Commission in its annual review of approximately 450 land use applications for a variety of discretionary approvals. The Department also assists both government agencies and the public by advising on strategic and capital planning and providing policy analysis, technical assistance and data relating to housing, transportation, community facilities, demography, zoning, urban design, waterfront areas and public open space.

About Advocates for Privately Owned Public Space
Advocates for Privately Owned Public Space (APOPS) is a private, not-for-profit organization founded by Harvard University professor Jerold S. Kayden in 2005 to promote greater public awareness and use of New York City’s 550 or so zoning-created plazas, arcades, and other outdoor and indoor spaces known as privately owned public spaces. APOPS has worked diligently to ensure that comprehensive and accurate knowledge about POPS locations and legal requirements are available and that owners observe applicable legal requirements with regard to public access and use. Working with The Municipal Art Society of New York, APOPS introduced in 2012 the first-ever comprehensive website containing an interactive map and detailed profiles of every POPS in the city. APOPS engages cooperatively with owners, civic groups, city agencies, community boards, and members of the public to improve POPS.