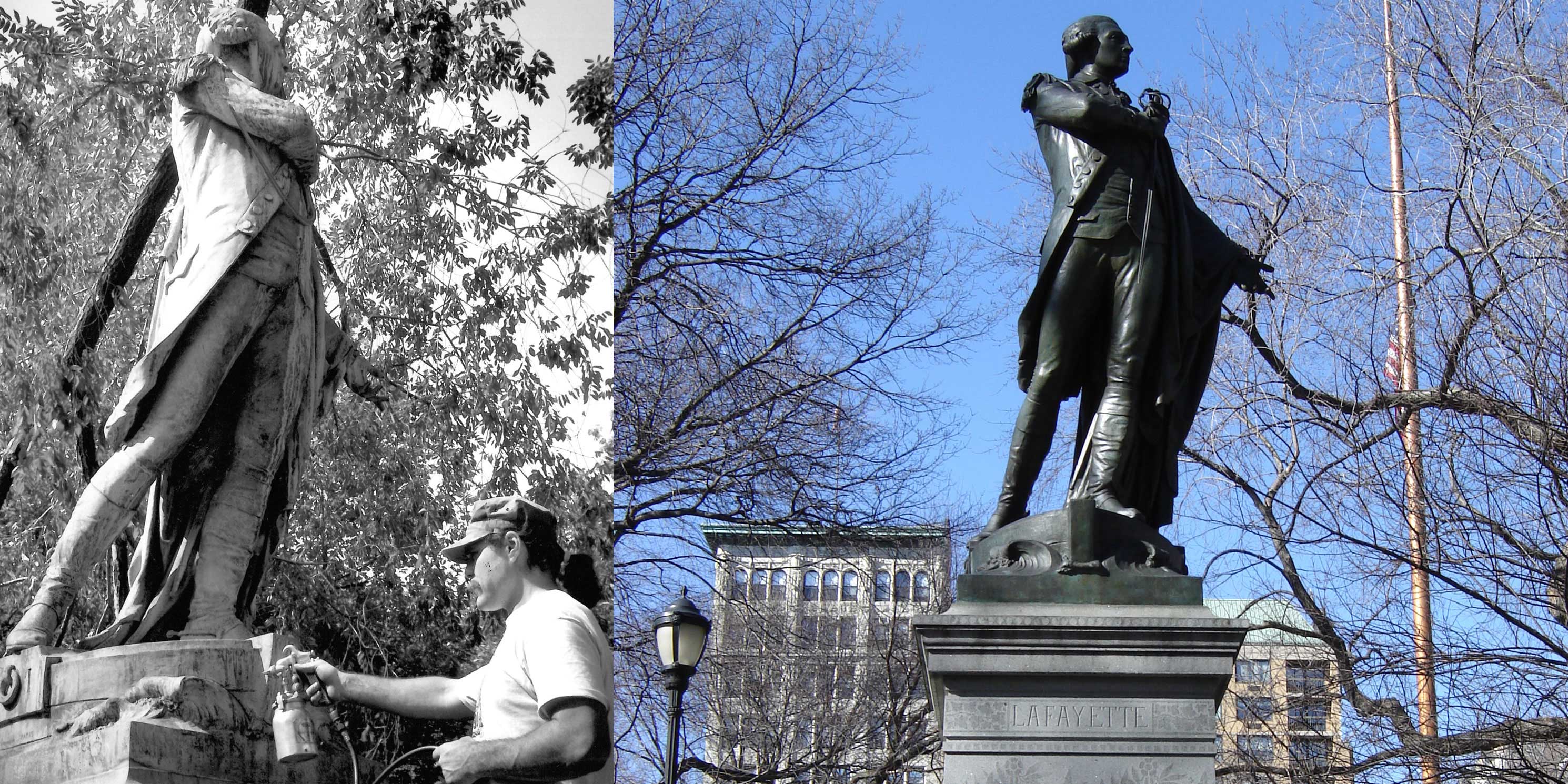 Restoration by the MAS Adopt-A-Monument Program (1991)

More than a century of city life had taken a toll on Union Square’s famed Marquis de Lafayette monument by the late 1980s. Nothing remained of the original foundry patination. Instead, the surface was covered by a chalky light blue-green copper sulfate with black areas of sulfide. Dark streaks and pitting, the result of acid rain, disfigured the face, torso and legs. The elegant stone pedestal was stained with dirt and pollutants, and the general’s sword was bent.

The restoration was executed by conservator Douglas Kwart in September 1991. After an initial hand-cleaning and rinsing to remove the soot and greasy dirt, active corrosion on the bronze was reduced by gently propelling finely ground walnut shells. This resulted in a uniform green color base upon which localized areas were repatinated to eliminate streaking. The statue was then brushed with Incralac, an acrylic resin with a corrosion inhibitor. The surface was finished with a final layer of microcrystalline wax and buffed with soft cloths. The bent sword was hammered back into shape with a rawhide mallet. Neutral detergents and water were used to wash the pedestal and the patterned ornamentation polished by hand to bring out the gloss. MAS, through its Adopt-A-Monument maintenance program, has continued to preserve this evocative work of public art ever since.

Background on the Statue

A decade before Frederic Auguste Bartholdi’s Statue of Liberty was presented to America by the citizens of France, another important monument to freedom – also by Bartholdi and also a gift from France – was unveiled in Union Square Park. On September 6, 1876, the Marquis de Lafayette, cast nobly in bronze, joined the venerable bronzes by Henry Kirke Brown of George Washington, 1856, and Abraham Lincoln, 1870, in this historic park.

On October 3, 1991 – 115 years later – the Marquis de Lafayette was rededicated, having been restored to its former glory through the Municipal Art Society’s Adopt-A-Monument program, with a grant from the Grand Marnier Foundation, an American based organization with French ties. It was, in fact, the restoration of Bartholdi’s masterpiece, the Statue of Liberty, that served as a prototype for rescuing New York City’s decaying public monuments.

Like the two previous Grand Marnier foundation “adoptees” ( Joan of Arc at Riverside Park and 93rd Street, restored in 1987, and the Bronx World War I Monument on Pelham Bay Parkway, conserved in 1988), the Lafayette is a tribute to French-American friendship. The first statue in the United States to honor Lafayette’s role as a Major-General in the Colonial Army during the American revolution, the monument was a gift from the French government in recognition of American aid during the Franco-Prussian war, 1870-71.

Bartholdi, who received the Lafayette commission in November 1871, had fortuitously just returned from his first trip to America to secure matching funds for the colossal Liberty. An ardent patriot and entrepreneur, Bartholdi accepted the Lafayette commission with fervor and an opportunity to engage Americans in his more ambitious campaign for Liberty in the New York Harbor. A group of prominent French citizens raised funding for the Lafayette pedestal, which was eventually awarded to the architect, Henri de Stuckle, the engineer for New York’s water systems and a friend of Bartholdi’s.

Bartholdi proposed two sketches for the monument. For the final version, a heroic ten-foot tall figure of the youthful Marquis, poised to disembark from a ship, offers his sword to the young republic of the United States. Wearing an 18th-century uniform, Lafayette is portrayed in wig, epaulets, and boots, with a clock falling in folds across his left shoulder. The melodrama is heightened by the General’s gaze into the distance with his left arm extended while his right braces the sword to his breast. In this gesture of allegiance, Lafayette seems to be echoing the eloquent words inscribed on the base, “as soon as I heard America’s Independence, my heart was enlisted.” The simple, light gray granite pedestal also bears a polished pattern of ivy leaves and floral garlands, a decorative contrast to the matte surface.

The sculptor envisioned his monument’s placement in Central Park. Instead, an alternative site had to be selected in Union Square. In the 1870s, the square was a fashionable business hub with hotels and theaters lining its perimeters. It was also here, on November 25, 1783, that General Washington stationed himself in New York, causing the British troops to evacuate the city after a seven-year occupation.

Lafayette stood originally on the south end of the square but was relocated several times due to subway construction. Eventually it was placed on its present site on the east side of the square between 15th and 16th Street still in close proximity to his great friend and hero, George Washington.