For the past several years, the Municipal Art Society of New York (MAS) has been a leading advocate for a comprehensive district and infrastructure plan for West Midtown. The redevelopment of a new Port Authority Bus Terminal (PABT) is critical to that effort. 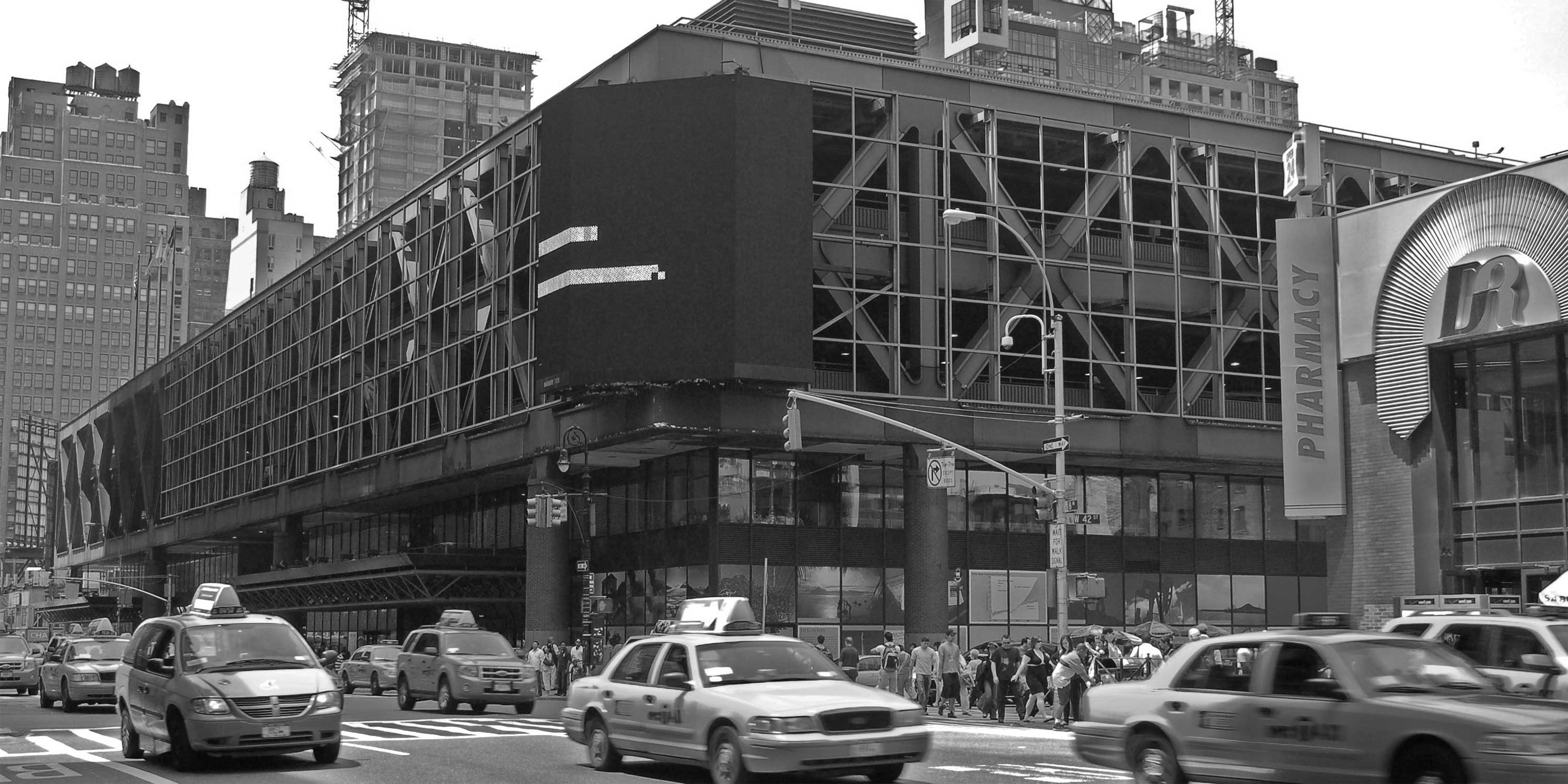 In its present state, the PABT can no longer accommodate the region’s current and future transit needs. We offer the following recommendations to ensure that the new facility succeeds as a world class, state-of-the-art transit hub capable of meeting the region’s capacity needs without creating undue environmental and neighborhood impacts. We look forward to hearing further details on the project’s master plan following the Port Authority of New York and New Jersey (PANYNJ) board meeting on September 28.

To foster inclusion and increase transparency in the PABT planning process, PANYNJ must promote and integrate effective public participation. We are encouraged by the September 2016 joint statement by PANYNJ representatives and New York and New Jersey elected officials regarding preliminary PABT planning efforts that “All future planning for the [PABT] will include significant stakeholder and public input.”

While we commend PANYNJ’s stated intentions, we seek a formalization of this commitment. Community members and people who rely on the existing facility–whether for transportation or employment–have unique knowledge and expertise that must be taken into account. Therefore, to ensure effective public input and inform future decisions regarding PABT, we strongly recommend establishing an oversight body composed of appointed or independently elected community members, including Manhattan Community Board 4 (CB4).

Hell’s Kitchen has long been affected by large transportation infrastructure projects, including the construction of Penn Station, the Lincoln Tunnel, and the original PABT, which resulted in the displacement of blocks of housing in the 1950s. With this in mind, the new PABT must minimize neighborhood environmental impacts during construction and operation. Therefore, MAS reiterates strong opposition to any property acquisition or eminent domain procedures that would displace local residents and/or businesses. We also expect that the new PABT will comply with existing New York City zoning and land use regulations.

Given the long-term impact of this project, we are confident that thoughtful design and siting of the new PABT would go a long way towards minimizing potential adverse impacts on the Hell’s Kitchen neighborhood. As the Independent Panel for the Design + Deliverability Competition suggested in its October 20, 2016 report, “placing at least part of [the] future Terminal underground” could be beneficial. We believe this design approach might reduce the new PABT’s footprint and height, while increasing efficiency of gate access and bus operations.

We are encouraged by PANYNJ’s recent discussions regarding redevelopment on the current site and renovating existing buildings. We feel this approach would significantly minimize potential residential and business displacement and neighborhood impacts. We are also looking forward to the results of the feasibility assessment that is currently evaluating the build-in-place option and the aforementioned new plans.

We urge PANYNJ to conduct a survey of the area’s historic resources, as required by City Environmental Quality Review (CEQR) and Section 106 of the National Historic Preservation Act. Our preliminary research shows three historic sites would be directly affected, including a block front of State/National Register-eligible tenements at 523-539 Ninth Avenue, which CB4 also cited in its April 11, 2016 letter to PANYNJ on the International Design + Delivery Competition.

PABT is in an air quality non-attainment area designated by the Environmental Protection Agency (EPA) and has some of the city’s worst air quality conditions. With this in mind, the new PABT must be subject to comprehensive and rigorous environmental quality review including an in-depth air quality evaluation, as required by CEQR and State Environmental Quality Review Act (SEQRA).

To reduce greenhouse gas emissions, we strongly urge PANYNJ to adopt building technology, materials, construction procedures, and operational systems for the new PABT that achieve LEED™ Gold certification standards. PANYNJ should also encourage bus operators to use energy efficient buses that reduce emissions of air pollutants, and must ensure that the new terminal is capable of accommodating these buses.

MAS is encouraged by the Design Competition proposals that include substantial sustainable design measures such as green roof and construction materials that filter pollutants.

With approximately 8,000 buses moving through PABT daily and a projected 9,100 buses by 2040, the Hell’s Kitchen neighborhood suffers disproportionately from the adverse environmental impacts associated with PABT. Therefore, the design of the new facility and bus operational changes must work to reduce this impact.

MAS has long advocated for a coordinated and comprehensive planning effort in West Midtown and for a long-term vision for trans-Hudson transportation. The prospect of a new PABT, and a new Penn Station, presents a unique opportunity to create a district with linkages to surrounding areas.

MAS also calls for increasing and improving inter-agency coordination between PANYNJ, MTA, DOT, NJ Transit, and other New Jersey and New York stakeholders. While organizations and projects must be coordinated, it is equally important to acknowledge that, in terms of trans-Hudson travel, different modes of transportation meet different needs. As stated in the PANYNJ’s September 2016 Trans-Hudson Commuting Capacity Study Summary Report, no one mode can take the place of another, nor will increased service in one necessarily decrease the demand in another.

Because the new PABT has the potential to stimulate new development in the area, sites for additional quality open space must be identified and integrated into the master plan to serve present and future residents and workers of Hell’s Kitchen. The project also presents an opportunity to connect the facility with nearby parks and public open space, including Hudson River Park, Bryant Park, and Hudson Park/Hudson Boulevard.

We believe the addition of new open space will help mitigate some of the environmental impacts of the PABT and associated development. We suggest that PANYNJ might consider developing a Community Benefits Agreement to guarantee the provision of open space and environmental benefits for Hell’s Kitchen residents and workers.

It is critical the new PABT has the capacity to meet the projected demand for decades to come. PANYNJ’s 2016 Trans-Hudson Commuting Capacity Study found that the reconstructed PABT should accommodate the 2040-forecasted demand while exploring “bus demand management strategies and flexible terminal development options.” According to the study, there is no “convincing evidence that a reconstructed bus terminal with substantially fewer gates than the full-build options presented in the MBMP could be relied upon to accommodate future demand for trans-Hudson bus travel over the useful life of the facility.” In addition, the study concludes that “there is no effective or practical substitute for expanded trans-Hudson commuter bus service.” Because it serves such a large (and growing) population and impacts the surrounding area in so many ways, the new PABT must be planned with an outlook of many decades.

The new PABT presents an opportunity to create a multi-modal transportation vision for West Midtown that involves buses, bikes, ferries, pedestrians, and subways (including the construction of the 10th Avenue Station of the 7 Train Line). Given the complexity of this effort, inter-agency collaboration is needed to effectively connect these various resources. The new PABT must also include an expansion plan that would eliminate the need for constructing another terminal on site when the proposed facility reaches its capacity.

The new PABT must include direct connections to tunnels and highways for buses that to the extent practicable, avoid traffic congestion on the nearby road network. The facility must also provide straightforward and convenient connections to New York City transit options such as buses and subways.

The Times Square — 42nd Street / PABT Subway station served 64.5 million riders in 2016, the most of any station in the City. As such, maintaining connectivity to these trains is critical for commuters and must be considered in the siting of the new PABT. These recommendations will help reduce commuting time and increase travel predictability.

And finally, the new PABT should include significant aesthetic improvements. By most measures, PABT’s design leaves much to be desired. We believe the busiest bus facility in the world, in a world-class city, should be welcoming to commuters, residents, and the public at large, in the vein of such remarkable transit spaces as Grand Central Terminal.

As a long-time advocate for comprehensive planning, we offer these recommendations with regard to a new PABT as part of the important dialogue between the PANYNJ and the public in shaping the future of this vitally important facility.

By combining the expertise of the PANYNJ, community members, architects, engineers, and urban planners we can create the world-class bus terminal that New York and New Jersey deserve.

We welcome your comments and look forward to the announcement of new plans for the facility.

We would like to continue the conversation for a new PABT that serves the needs of both New York and New Jersey.