However, MAS is troubled about the Educational Construction Fund (ECF) school construction process, the proposal’s inconsistency with the transition zone that was envisioned for the site between Downtown Brooklyn and Boerum Hill in the Downtown Brooklyn Rezoning process, and other significant unresolved underlying planning policy issues that preceded this proposal.

The City’s inherent unwillingness to construct school facilities with public dollars and its increasing reliance on zoning and private sources for school financing that leads to out-of-scale residential towers, remain a primary source of concern.

One thing is certain. The magnitude of the proposal cannot be overstated (Figure 1). With an FAR of 18, it would represent the highest density development outside of Manhattan since 1961 that does not use a transfer of development rights to achieve its peak density. As such, this is far from the transition area envisioned fourteen years ago. 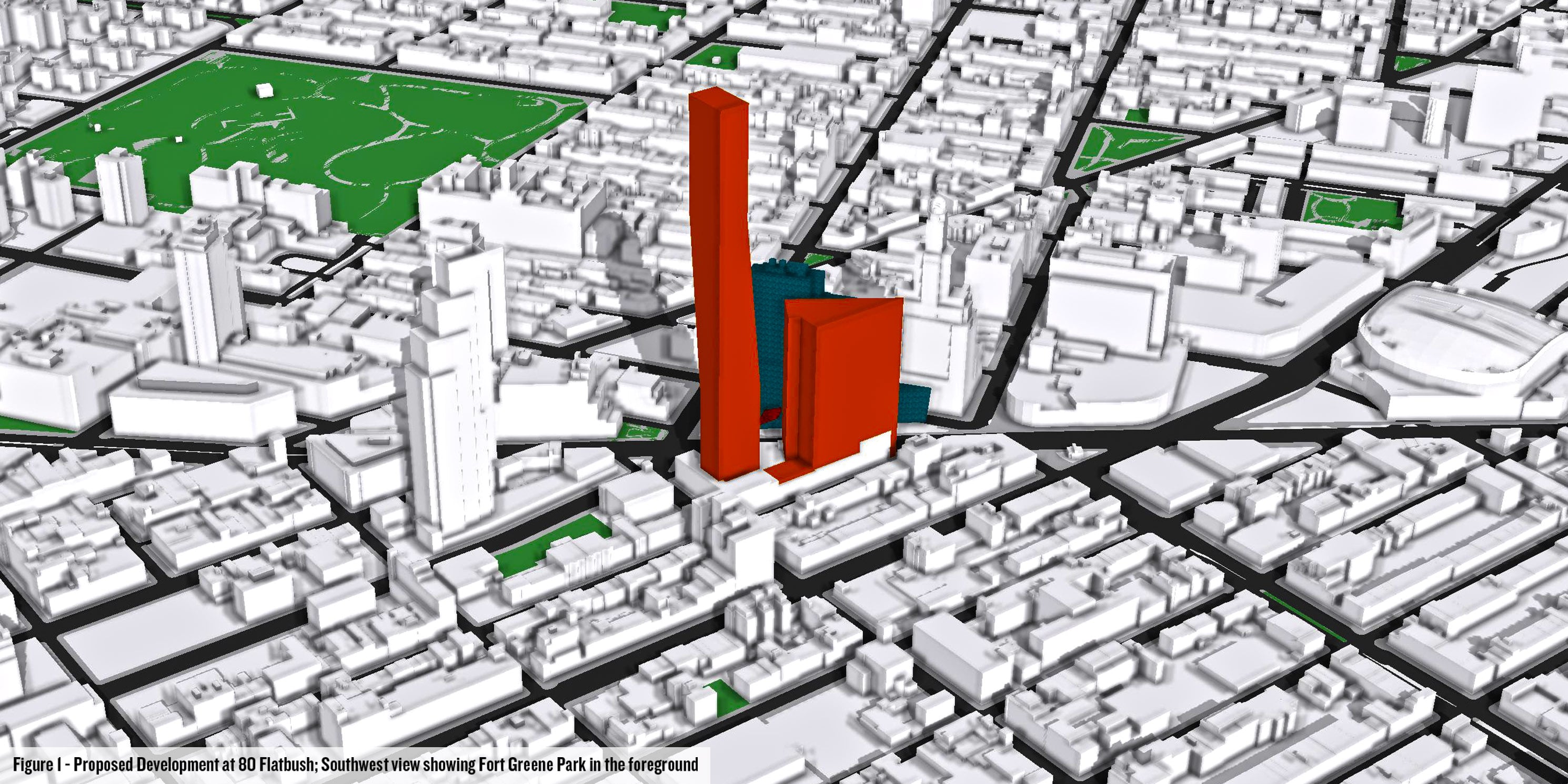 The 2004 Downtown Brooklyn Rezoning sought to frame future development of the area as a regional central business district. Although far from perfect, the rezoning represented a protracted and comprehensive long-range strategy involving many stakeholders to create a vibrant, multi-use urban environment in Downtown Brooklyn.

As part of that vision, the 80 Flatbush Avenue site was identified as a transition zone, which, according to the 2004 Downtown Brooklyn Development Final Environmental Impact Statement (Downtown Brooklyn FEIS), would allow contextual buffers between large-scale commercial buildings in the downtown core and low-scale buildings in the residential Boerum Hill neighborhood.1

This would be achieved through “extensions of the district, added flexibility in height and setback envelopes, additional height limits, and changes to permit residential and community facility uses.”2

The 2004 rezoning also sought to create a connection between the commercial and retail cores of MetroTech and Fulton Mall and the Boerum Hill residential neighborhood. As for the development of the 80 Flatbush Avenue site and surrounding area, the Downtown Brooklyn FEIS stated “the proposed height limits along these blocks will be reduced in order to create a transition to the nearby low-scale, residential neighborhood.”3 [emphasis added]

Under the 2004 plan, development of the 80 Flatbush Avenue site was projected as 199,000 sf of residential use (199 dwelling units) and 40,000 sf of retail for a total of 239,000 sf. In stark contrast, the current proposal would represent an over five-fold increase in floor area. Not to mention the inclusion of an almost 1,000-foot tall tower. 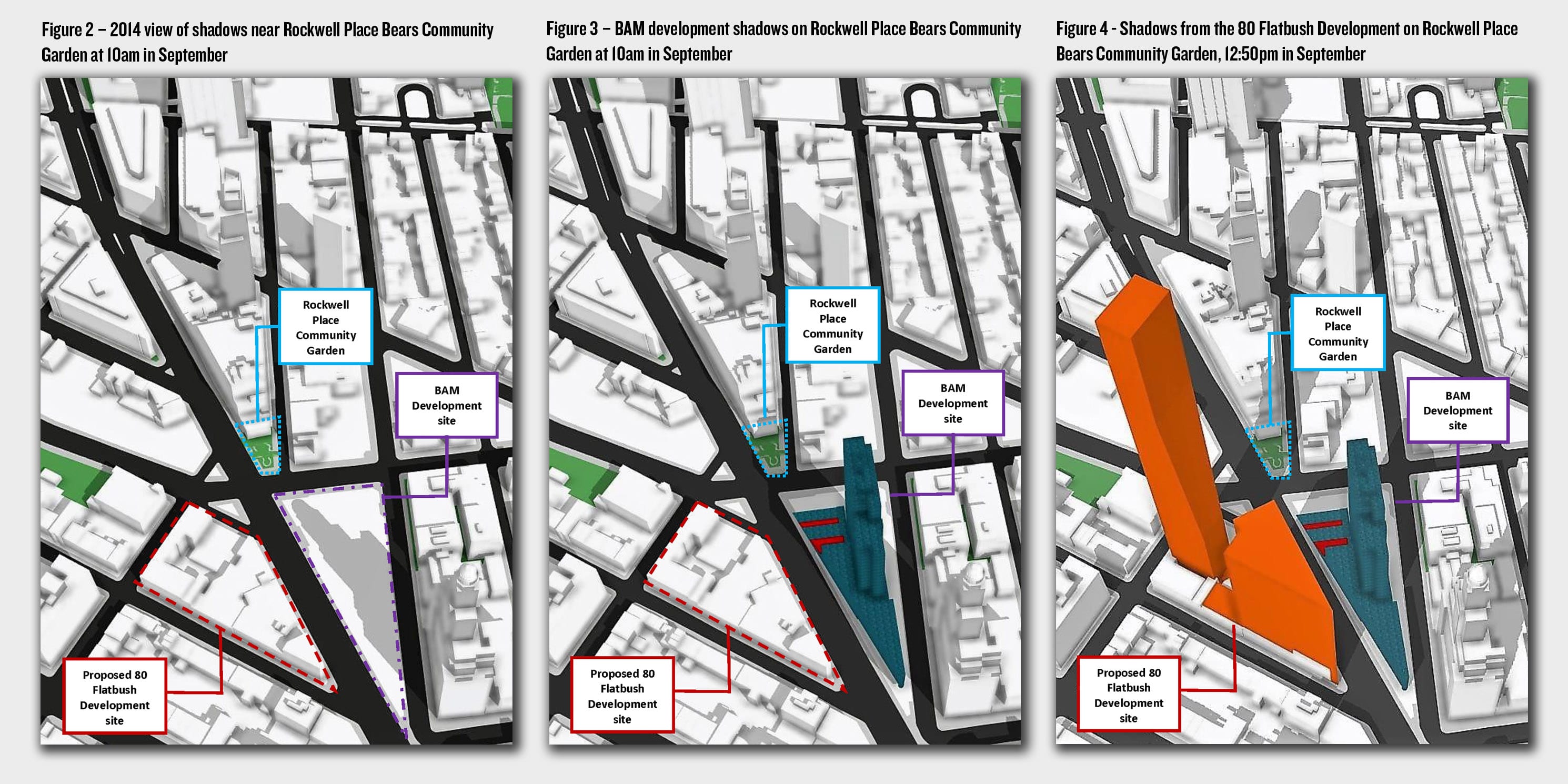 In addition to being the highest density development outside of Manhattan not using development rights, the 18 FAR proposed for 80 Flatbush Avenue would eclipse the high-density 12 FAR zones approved under the Downtown Brooklyn Rezoning.

The contrast is more startling when compared to the adjacent lower density Boerum Hill neighborhood, where the buildings have a mean height of 38 feet. The tallest, NYCHA’s Wyckoff Gardens, is only 184 feet.

As mentioned previously, while we support the construction of a new lower school and the adaptive reuse of the historic school building for the 350-seat middle school, the fact is, even with the 388 incremental new school seats, enrollment capacity in Subdistrict 3/Community School District (CSD) 15 will significantly worsen.

By the 2025 build-year, enrollment utilization will increase from 107 percent to 158 percent over capacity, leaving the CSD to operate at a deficit of 3,371 elementary school seats. On a historic level, the project brings to light the gross under-estimation of residential development that occurred under the Downtown Brooklyn Rezoning, and subsequently, the City’s lack of foresight to address the problem of overburdened public schools and publicly funded daycare facilities in the area. The development at 80 Flatbush Avenue will greatly exacerbate these conditions.

The Downtown Brooklyn Rezoning woefully underestimated the amount of residential development the area would see over the next ten years. According to the Downtown Brooklyn FEIS, 979 dwelling units were predicted by the 2013 build year. However, by 2014, an astounding 11,000 housing units had either been developed or were planned for development. This represents an underestimation of 8.9 million square feet of residential floor area.4

During the 2002-2003 school year, prior to the Downtown Brooklyn Rezoning, elementary schools in CSD 15 were at 85 percent utilization.5 The Downtown Brooklyn FEIS anticipated that program utilization in CSD 15 would increase to 88 percent by 2013, leaving a surplus of 2,125 seats. However, the reality in 2018 tells a very different story. Due to the gross underestimation of residential development under the Downtown Brooklyn Rezoning, elementary schools in Subdistrict 3/CSD 15 are currently operating at 107 percent utilization, which would increase to an eye-raising 158 percent with the proposed development.6

The gross underestimation of residential development under the Downtown Brooklyn Rezoning has created an added demand for publicly funded daycare centers in the area. According to the Downtown Brooklyn FEIS, there was a surplus of 314 publicly funded daycare center slots in the project area in 2004.7 The FEIS concluded that the demand for public day care facilities would not cause a significant impact on public day care centers.

The 1,288 residents and 1,059 incremental new workers introduced to the neighborhood with the proposed development would place great demands on the area’s open space. Under current conditions, the neighborhood is already underserved. The residential open space ratio is only 1.043 (acres per one thousand residents), which is far below the city’s median of 1.5. With the proposed development and additional population, the ratio will be further reduced to 0.86, almost 20 percent worse than existing conditions.

Following the Downtown Brooklyn Rezoning and subsequent redevelopment of the Brooklyn Academy of Music (BAM site) at 300 Ashland Place, the area has seen a continual erosion of the amount of sunlight that reaches the limited public open space. This raises serious concerns about unaddressed cumulative impacts of the proposed development (Figure 2).

A 2012 Technical Memorandum issued for the BAM site redevelopment evaluated shadows on RPBCG.8 While the memorandum acknowledged that incremental shadows would be generated during the morning hours for three out of four evaluation time periods, it concluded that no adverse shadow impacts would occur (Figure 3).

It is evident that between the BAM site and the proposed 80 Flatbush Avenue development, sunlight that reaches RBCBG would be significantly reduced to the extent that it would have a destructive impact on shade intolerant plants, not to mention the public enjoyment of this admired space. Human beings need light to maintain health. This is not just an issue of public amenities but what commitment the City makes to the health and well-being of all its citizens. Light is easy to take but its removal has far-reaching consequences and implications.

The DEIS does not provide an evaluation of channelized and downwashed wind in relation to the proposed buildings and other tall buildings in the area that could create adverse conditions for pedestrians. We expect this evaluation will be completed for the Final Environmental Impact Statement (FEIS).

Alloy’s impressive design notwithstanding, MAS remains opposed to the planning and policy framework pursued by the City and ECF in advancing this proposal. School financing cannot drive the zoning rationale. The City’s inherent unwillingness to construct school facilities with public dollars and an increasing reliance on zoning and private sources for financing has led to an associated private residential development that is out-of-scale with the neighborhood and grossly inconsistent with the long term vision for the site.

At a minimum, the project’s massing and height should be re-evaluated to insure that some of the most extreme shadow impacts could be significantly reduced and provide more of the transition zone that was envisioned in the Downtown Brooklyn Rezoning.

If the proposal is allowed to go through without modifications to address the anticipated environmental impacts, a compelling case could be made to take a hard look at the City’s environmental review process and the methodologies used to project future development.

The current proposal for 80 Flatbush Avenue has pushed the project site from a transition area with reduced heights and flexible height and setbacks to one of New York City’s densest developments.

We urge the applicants and the City to work with the community and come up with a reasonable proposal that better represents a collective vision for the future of Downtown Brooklyn and the adjoining neighborhoods. 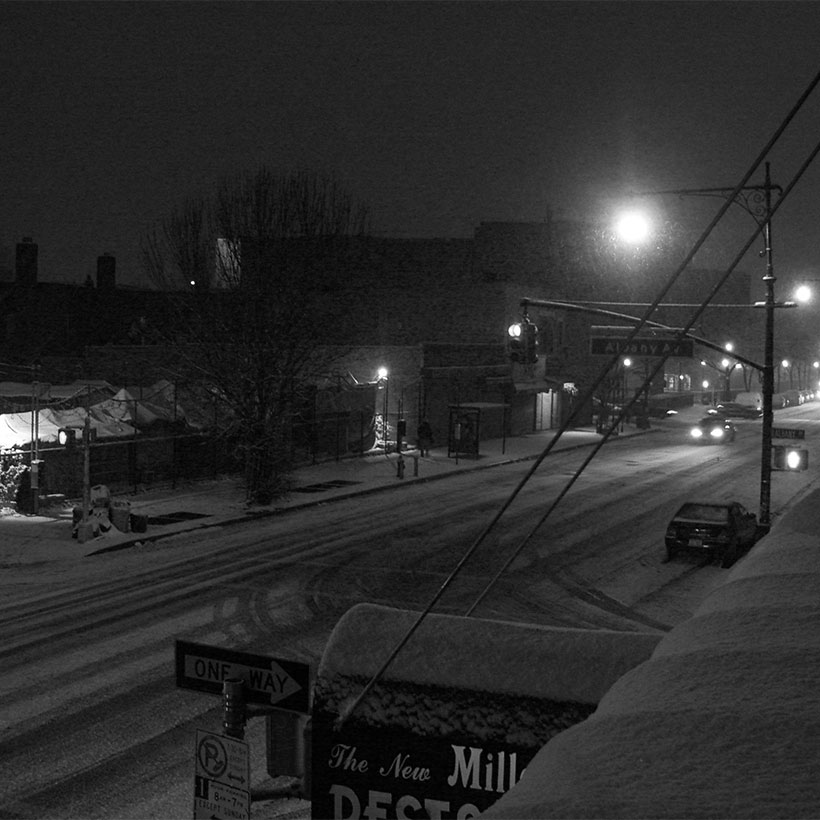