Comments to Manhattan Community Board 2

The City’s Soho/Noho Neighborhood Plan, the area’s first major rezoning in 50 years, could transform these iconic historic neighborhoods. It is this potential that is of critical concern to the Municipal Art Society of New York (MAS). Soho/Noho needs a comprehensive, neighborhood planning approach to create affordable housing, increase livability, and preserve the area’s invaluable historic integrity. The rezoning as proposed, is not the answer.

The City’s effort to expand residential density in historic, high-opportunity neighborhoods such as Soho- Noho comes from its Where We Live In NYC plan, which explores strategies to increase housing construction throughout the city, including within historic districts. While we disagree with the Plan’s mischaracterization of historic district protections as constraints to development that have resulted in a net loss of housing, we agree that historic, higher-income neighborhoods such as Soho-Noho are places where affordable housing needs to be increased. But the provision of housing, affordable and market- rate, must be part of a neighborhood plan that addresses the needs of people at all income levels and reflects true community input. 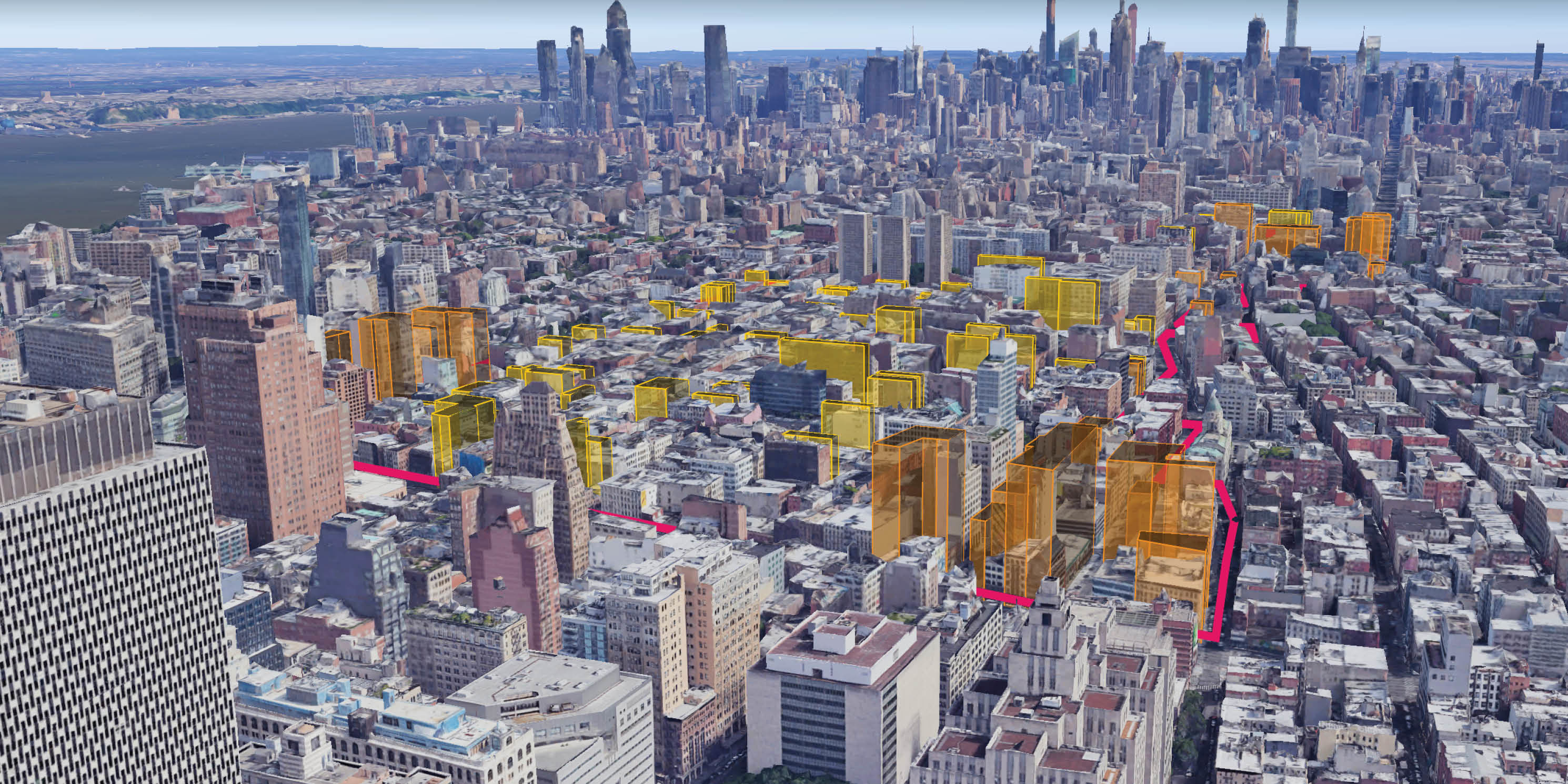 This Google Earth 3D Model of the rezoning area shows “projected” and “potential” development sites (in orange and yellow respectively) in the existing context. Again, the new zoning will apply to all lots within the boundary.

The rezoning would create a Special Soho/Noho Mixed Use District, covering an approximately 56- block, 146-acre area and produce almost 1,900 new dwelling units on 26 projected development sites, including up to 573 affordable units under the City’s Mandatory Inclusionary Housing (MIH) program. If all 58 potential sites are developed, overall residential development would almost double to over 3,600 dwelling units, 1,100 of which would be affordable. The potential 3.5 million square feet of new residential density is the equivalent of One World Trade Center. On projected development sites, the rezoning would also introduce over 60,000 square feet of retail and supermarket space and a small amount of community facility space. The Plan is expected to bring almost 3,500 new residents to the area in the next ten years.

If the City truly seeks to successfully infuse diversity into Soho/Noho and other historic neighborhoods by increasing affordable housing through MIH, it must recognize that rezonings bring about massive expansions of high-end, high-rise, market-rate residential development. This type of development could threaten the area’s historic character and stymie efforts for advancing fair housing practices and achieving other equitable goals. This dilemma is borne out in that the City acknowledges there will be an over four-fold income disparity between new households in the market rate units ($232,802) and households in the affordable units ($57,300) under the proposal.1

The Soho-Noho of 2021 is a much different place than it was in 1971, when the original zoning was put in place to create live-work spaces for artists in lofts vacated by the steady departure of manufacturing businesses. The original Joint Live Work Quarters for Artists (JLWQA) permissions, the only as-of-right residential use still allowed in the district, helped introduce affordable housing and legalized land use changes in the area fifty years ago. The success of that rezoning helped transform Soho-Noho into what it is today: one of the City’s highest end residential and shopping areas. As the City pushes for another transformation in Soho-Noho, we offer the following comments and recommendations.

Having carefully examined every neighborhood rezoning under the de Blasio administration, MAS recognizes the uniqueness of SoHo-Noho. It is one of only two neighborhood rezonings that involves a predominantly white (78 percent), higher income area (median household income is $144,508 compared with $79,781 for Manhattan). Almost half of the area rental units are priced above $2,000 per month. The neighborhood also has a high level of home ownership. Roughly 40 percent of the area’s housing units are owner-occupied, nearly twice the Manhattan average.

In a high-opportunity neighborhood such as Soho-Noho, the issue of increasing housing affordability is better defined by how a plan increases housing choice. To reach the needs of people at all income levels, we suggest introducing a fair housing plan as part of the rezoning that increases net affordability and housing choice. The complexities of introducing affordable housing in Soho-Noho beg for strategies nuanced beyond the reach of MIH. We suggest a new MIH model for the Special District, one that uses a transfer of development rights strategy that directs growth outside of the historic districts. This could be accomplished by making historic districts sending sites for development rights that are received in sites outside the districts.

MAS strongly urges better design, more public discussion, and district empowerment to better manage change and growth expected with the rezoning. The City should also explore using City-owned sites for development and studying how to achieve a nexus for historic districts taking on additional capacity as part of improvements to MIH.

The question of housing choice in a high-opportunity neighborhood like Soho-Noho is directly related to whether the area is livable for people of all incomes and provides equitable access to stores, transit, and schools. To create a truly mixed-income district, the plan needs to minimize the four-fold disparity in income levels expected with new residents in affordable housing households and those in market rate units. One way to accomplish this goal is to support a retail mix that can provide for new lower- and middle-income residents. We discourage the inclusion of national chains and support small, locally owned and operated businesses.

MAS supports a plan that provides new residents of all incomes access to quality schools—schools that can accommodate the needs of all students without being overwhelmed beyond capacity by new residents. To disclose this information, we recommend that area school performance be evaluated in the Final Environmental Impact Statement (FEIS). The City should also explore safety and the public realm, the affordability of commercial and retail spaces, revisit incentives under the FRESH program, and find ways to increase the availability and affordability of artist and small manufacturing spaces.

Questions about Development Projections and Evaluation of Impacts

In our Draft Scope of Work (DSOW) comments, we requested that the DEIS evaluate the impacts of all potential development sites for density-related impact to provide a reliable evaluation of overall development under the proposal. This analysis was also not provided. For full disclosure under CEQR, we expect this evaluation to be included in the FEIS.

According to the DEIS, the rezoning would establish bulk regulations that more appropriately respond to neighborhood context, provide flexibility to minimize the effects of new developments and enlargements on neighboring buildings and allow LPC to shape the building form in a manner appropriate to the neighborhood and the immediate context without the need for separate land use actions. The DEIS emphasizes that development within the LPC-designated historic districts would be subject to the protections of the NYC Landmark Law and would need to be reviewed and approved by LPC. However, the DEIS makes it clear that historic resources and contributing elements in the S/NL historic districts are not protected by the Landmark Law and are in essence free game for demolition and redevelopment.

As evidence, the rezoning would result in the demolition of 73 historic buildings in the S/NR-listed districts. 2 The rezoning will also adversely impact the S/NR-listed Bowery Historic District, the Samuel Tredwell Skidmore House (S/NR-listed, NYCL) and the Old Merchant’s House (NHL, S/NR-listed, NYCL, NYCL Interior) by allowing taller buildings on adjacent lots that will be out of scale with nearby historic districts and buildings. The DEIS concludes that there is no mechanism to avoid or fully mitigate these impacts at these sites because they are not protected under the New York City Landmarks Law.3

Although they are not protected under the Landmark Law, we assert that S/NR-listed and eligible resources are critical to the overall character of the neighborhood and must be protected. We urge the City to coordinate with the State Historic Preservation Office (SHPO) and work out a plan to avoid demolition and other impacts to S/NR resources, regardless of whether a Federal or State permit is required as part of the rezoning approval. There is far too much at stake for the State not to review the proposal. We also urge that all correspondence with SHPO be included in the FEIS.

We also support expanding the role of LPC beyond reviewing development under the rezoning for appropriateness. We urge the City to work with LPC and Community Board 2 in a transparent effort to come up with design guidelines to frame new development. LPC should also be allowed to determine a bonus floor area structure when new development complies with a determination of appropriateness.

With regard to the amount of potential development in the City-landmark districts, we urge complete transparency regarding City outreach efforts with LPC. All correspondence between the two agencies must be included in the FEIS and made available to Community Board 2. This includes but is not limited to environmental review, demolition plans, and design guidelines for new construction.

In our DSOW comments, MAS requested that the DEIS include a map of the rezoning area showing the historic district boundaries, since none was provided. This request was ignored by the City in the DEIS. For a rezoning proposal involving a neighborhood in which 80 percent of the project area is in a historic district, the omission of a map or other graphics illustrating this critical information is counter to the purposes of CEQR as a disclosure process. In addition, the DEIS RWCDS spreadsheet that contains critical detailed information about existing and future development in the rezoning area, is in a font so small it is not legible without being greatly magnified. We urge the City to disclose the RWCDS in the FEIS as a readable spreadsheet and as a CSV and GIS Shapefile on Open Data.

Over the past fifty years, Soho-Noho has transformed into a much different place than it was in 1971. As it is poised for another transformation, Soho/Noho needs a plan that ensures that the historic character of these special neighborhoods is preserved and current and new lower income residents can enjoy the benefits of living in two of the City’s iconic neighborhoods. MAS believes historic preservation protections and affordable housing opportunities need not be oppositional forces. Given the importance of this proposal, both in its potential to transform Soho-Noho and lay the groundwork for diversifying other historic high opportunity neighborhoods, we urge the City to work with LPC, SHPO, and Community Board 2 to create a plan that addresses our concerns. 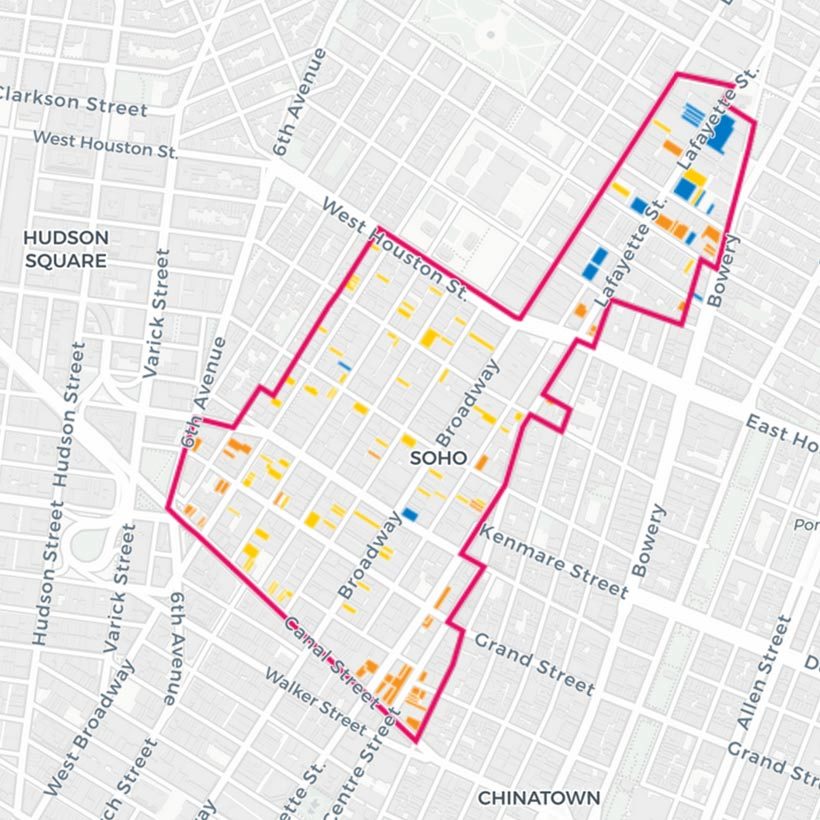 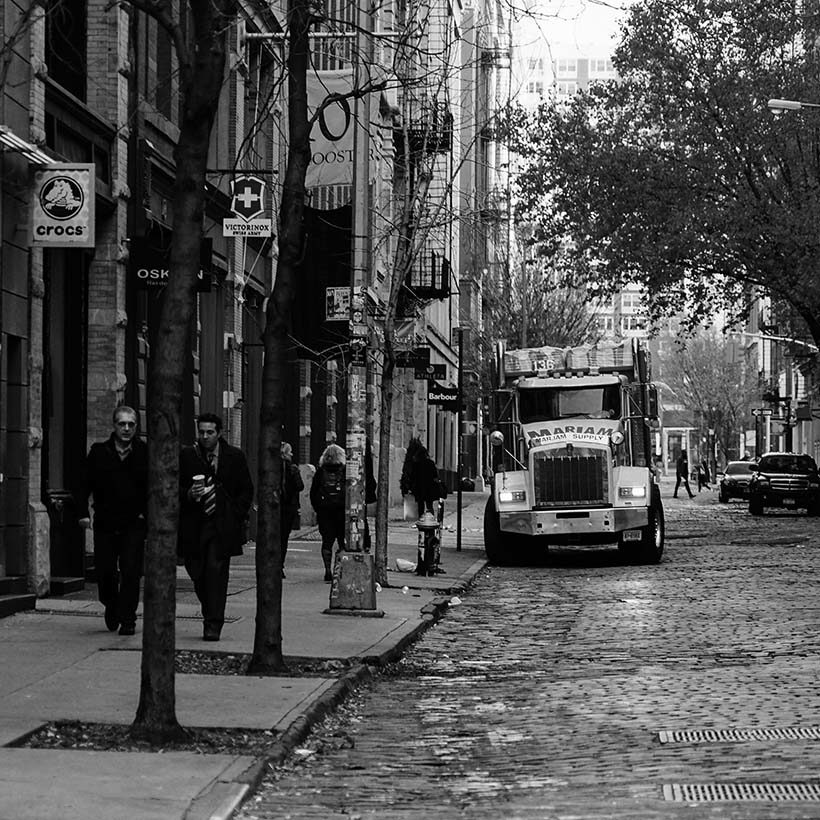